Following the introduction of water-cooled power electronics in variable-frequency controllers, we designed our own Van der Leun heat exchanger. This heat exchanger has been specially developed to ensure a stable cooling water temperature while minimising condensation in the frequency controls. 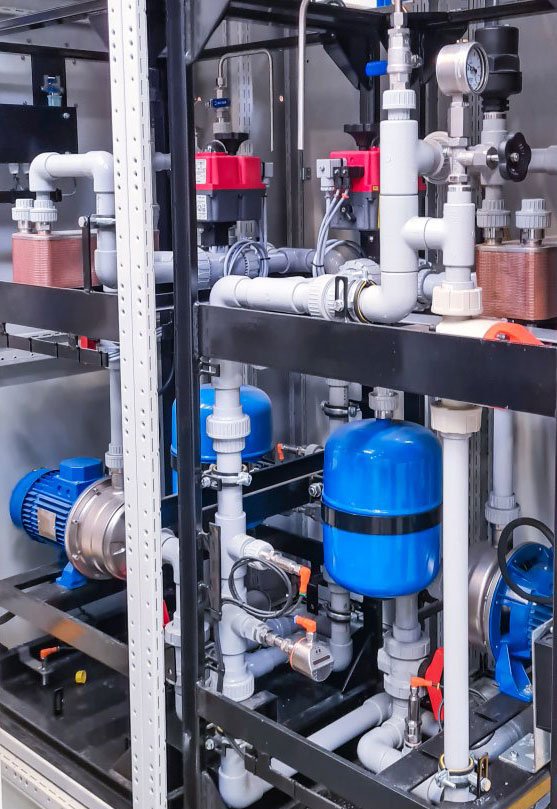 The heat exchanger - also known as the Hex Unit - is available in several variants. We also have a Mini Hex, which is the Hex Unit's little brother.

Both units are designed in such a way that the components are easily accessible from the front for maintenance.

The Mini Hex has a soldered heat exchanger and is smaller in size. The piping system also has a smaller diameter than its big brother, but due to the dual-stage vane pump its flow equals that of the big hex unit in certain situations.

The standard capacity of the Mini Hex is 40KW, in the version with a plate heat exchanger it is also available with slightly larger capacities. The standard design of the Hex Unit comes with a plate cooler, which can be extended to 180 kW. Instead of a technical water system, seawater can be used for cooling. If required, the plate coolers can be supplied with a classification certificate.

Both systems can be equipped with a single or double pump, and also for the supply of external and internal water the configuration may vary.

The Hex Units have a dedicated control circuit with a three-way valve.  An overpressure valve ensures that the pressure does not reach undesired levels.  Deaeration of the system occurs at three locations: on the pump itself to prevent the seals running dry; on the cooler by means of an automatic deaerator, and by manual deaeration. The latter is also used for filling the system.

The system is equipped with a pressure and temperature transmitter which ensures that data can be read into each system via a 4-20mA signal. A standard feature is a flow switch which issues a warning when there is no flow. Leakage detection in the drip tray of the heat exchanger sends out an alarm in case of water leakage.